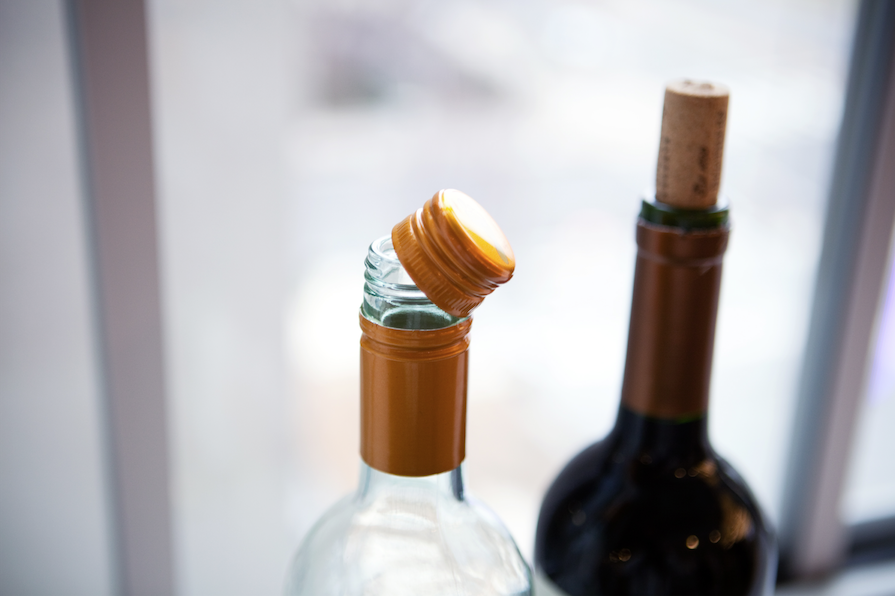 People love corks. Maybe it’s the pomp and circumstance of cutting the foil and pulling the cork out to hear that "pop" that makes it so appealing. For almost two centuries, a cork has been THE way to seal a bottle of wine. Long gone are the days of selling whole barrels to then fill the cups of patrons and guests.

Regardless of the appeal, corks have presented serious issues for consumers and wine producers alike. Corks are often subjected to potential contamination (in turn contaminating the wine with flavor voiding bacteria), they can become damaged due to excessive heat or humidity issues, and can at times become cumbersome to put back into the neck of the bottle. The invention of screw caps toward the later part of the 20th century were designed to solve a portion of this problem. Due to their aesthetic however, screwcaps or stelvin closures, have a consumer rejection problem when it comes to how they present themselves on a bottle of wine, but is the fuss really worth it? Let’s dive in:
The Pros of Corks
We start by immediately addressing the benefits of having your wine bottled by a cork, which to the surprise of the casual wine drinker, there are not many that standout in relation to other closures. In fact, the only primarily identifiable benefit of having a cork sealing that wine you are drinking is that its condition might suggest that something is wrong with it. An elevated cork or a depressed cork that differentiates from its evenness from the lip of the neck would highlight a storage problem. The only other obvious help is that a cork prevents someone from just pulling the wine off the shelf and taking a quick swig. Even then, customers tampering with unpurchased products is rarely ever an issue in a retail setting.
The Cons of Corks
There are far more problems that can arise by having a cork than not having a cork. First, it’s important to note that corks, particularly genuine corks and even cheaper agglomerate cork brands (corks created from shredded cork chips glued together) can potentially cause the bottle to be contaminated with TCA, which renders the wine flavorless and faulty. Thankfully this only applies to roughly one out of every ten bottles of wine statistically speaking. Regardless, using a cork on the production end of things opens the door for a potential return of the product, even if the wine is not necessarily corked. The data here is not particularly easy to calculate due to the speculation of each circumstance, yet it can be surmised that thousands of bottles are returned or rejected each year to retailers because they are “corked” when in actuality, there is a separate issue at hand.
As pieces of organic matter, corks are much more vulnerable to degradation than other closures. The reality of it is is that, unless kept in perfect conditions from beginning to end, corks have a tendency to fail if handled too frequently, combined with a less than desirable storage environment. All it takes is a small degree of shrinkage due to fluctuating humidity or a rocky ride from one part of the country (or world) to the next to cause a problem. This is magnified even further when the wine is on the old side. Anyone who consistently deals with older wines can attest to the huge problem a brittle cork can be.
To keep this article concise, we are approaching our rag limit when it comes to corks. Corkscrews are an essential tool for opening bottles with corks, but you would be surprised as to how frequent the dilemma becomes for a younger crowd when there is no corkscrew or there is no desire to buy one as an expense on top of a current purchase. This might seem like an incredibly trivial problem, yet it's an issue that can potentially arise for anyone, especially when the corkscrew you usually keep in the kitchen drawer goes missing.
The Pros of Screwcaps
Maybe it is not the most aesthetically pleasing with the swirly threading, but as we are about to discover, the technology of the screwcaps is actually superior to corks in more ways than one. To start, it is far easier to open a bottle of wine with a screwcap than a cork. You don’t need a corkscrew, there is less arm strength involved and there are none of the technical problems associated with corks to worry about. Screwcaps do not crumble and they do not have ill-tempered responses to poor cellar conditions. And of course, it is way far less likely you will deal with a wine that is actually corked.
One of the common misconceptions is that screwcaps are bad for aging wines long term. There is no hard evidence to back this claim up. In fact, one can argue that the aging process under a screwcap is far more slower than if the wine was bottled under a cork, thus increasing the shelf life for even wines meant to be drunk right upon release. Older vintages of notable Australian wines, whose producers mostly utilize screwcaps to seal their wines, have proven this theory to be true. To add, several producers of fine German wine have turned to screwcaps for their Rieslings to extend their already significant ageworthy qualities.
The Cons of Screwcaps
There are only two noticeable problems with screwcaps that can be found, and even then, they are not exclusive to just this method of closure. Screwcaps, being made from rather malleable metals that can be bent easily, are not safe from damage or harm. Dents, bruises and nicks in the metal can cause leaking if the capsule is damaged. The second fault is caused by how direct it can be to drink from a screwcap wine. All you have to do is twist the cap off, which makes tampering with a bottle of screwcap wine much easier than one with a cork. Warding off this issue is simple though, and only requires that you notice if the screwcap is secured or makes a clicking sound when you open it.