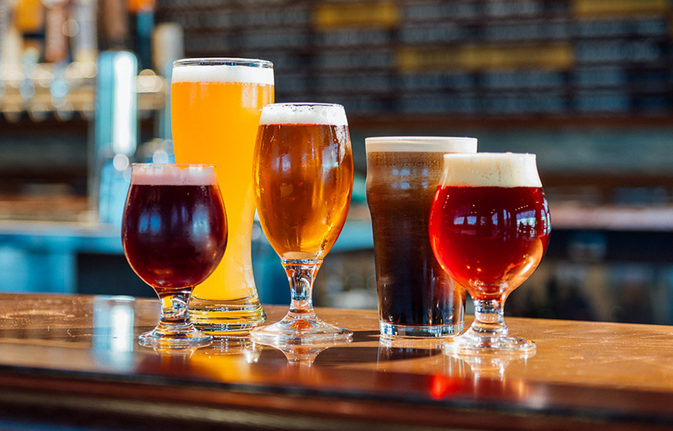 If you haven't seen already, our beer section at the Wine Library has been redone to include anything you're in the mood for! Whether it's craft or domestic, local or import, hoppy or hazy, there's a beer for every occasion. This time of the year can make seasonal beers confusing. Holiday commercials are already on TVs and radios, as well as our beer aisles. For those still clinging to Fall and looking forward to bringing something nice to Thanksgiving dinner, the holiday stuff is mixed in with craft beers like Single Cut's Autumn Landscape and Central Waters' Octoberfest. Coming to you as someone that can spend all day in a beer aisle, here's the first of our weekly recaps on what's new in our section.

ASLIN TOKYO SMOKE IPA
Aslin Tokyo Smoke is brewed in Virginia, a fruity IPA that pours at a bright golden color. Galaxy and Mosaic hops balance this four-pack of brews for smoothness and hoppiness, on sale for $16.99. Tokyo Smoke is on the lighter side at 5.5% ABV.
MAST LANDING WINDBREAKER
Windbreaker is one of several double dry hopped IPAs we carry, and the fifth different beer from Mast Landing we've brought in. A hazy orange color, Windbreaker is a crushable IPA at 6.5% ABV. Find it alongside Mast Landing's All The Way, Arts and Entertainment, Close Up Magic, and Find Me Dreaming for $14.99.
KANE CLOUD COVER
If you follow us on social media, you've seen the build up for Kane Brewing joining our lineup of local New Jersey beers. Brewed out of Ocean Township, NJ, Kane is known for their Head High IPA, but presents lighter options such as the Sneakbox American Pale Ale. Our newest addition is the Cloud Cover, a Belgian style white beer that's 4.8% ABV. The lightest of Kane's offerings, find it in  theJersey section for $12.99.
RIVER HORSE HIPPOTIZING IPA
A personal favorite of mine, this beer is hard to miss with it's bright pink and green can. Inside is a tremendously smooth IPA from River Horse, another New Jersey brewery out of Ewing. Hippotizing is sold in the same spot as Kane for $11.99.
KCBC RESERVOIR FROGS
Right next to our New Jersey selection is an impressive amount of New York area beers, including KCBC. The first of two new selections from them named after hit movies, Reservoir Frogs is a play on Reservoir Dogs. This hoppy IPA is brewed with some wheat flavor, on sale for  $17.99. Reservoir Frogs is 8% ABV.
KCBC INDIANA BONES AND THE RAIDERS OF THE LOST BARK
This might be my favorite beer name in the whole store, with a great can design to go with it. The cute dog on the can, complete with Indiana Jones' signature fedora, introduces you to this hazy and fruity IPA, a 7.2% ABV brew for $17.99.
KCBC BUSHWICK ZOMBIE
The third and final new beer from KCBC is another sour, paired with their Marble of Doom fruited sour in the cooler. This is a sour with blueberry, strawberry, and lemon flavor for $15.99.
KCBC WHAT WE DON'T SEE
As mentioned, our wintery section of beers is full of stouts and porters to pair with a night inside by the fire. KCBC's new stout is one of our strongest, with an imperial rating at 9% ABV. If you're a fan of dark stouts, and haven't considered local options for one, this is a brew to try for $17.99.
SINGLECUT HALF STACK
Another brand often featured on our Instagram, SingleCut beers make up the majority of our New York section. Half Stack is a fresh IPA that drinks smooth at 6.6% ABV. If you haven't had success finding the right IPA yet, going with something local is a great place to start. Half Stack can be found with the rest of our SingleCut varieties, including the return of Hand Held Honey, for $15.99.
SINGLECUT ERIC! MORE COWBELL
Another personal naming favorite of mine, Saturday Night Live's cowbell skit can now be remembered in a delicious chocolate stout. A smooth and local option at $14.99, this stout is paired with another dark coconut beer from Single Cut on our seasonal shelf. If you have a fever, this 6% ABV stout is the only prescription.
BLUE POINT WINTER
One of two new additions to our winter ales is Blue Point's Winter. Known for crisp flavors in their beers, this is a great pack to keep in your fridge, with 15 cans in a case for $16.99.
SOUTHERN TIER OLD MAN WINTER
Yet another New York seasonal beer, Old Man Winter is available in six packs from Southern Tier. A brown ale with a slightly smoky flavor, this 7.5% ABV beer is available for $9.45.
We hope you'll take the time to come check out our rotating collection of beers. Ask for me, Sean, when you're around the store and I'll be happy to recommend something new!