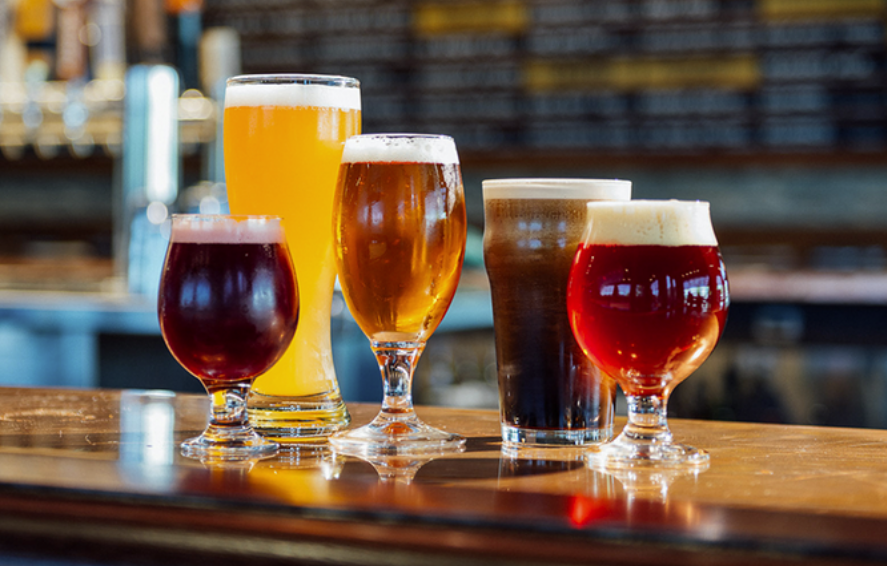 We’re heading into the New Year with a great selection of beers from some of the most sought after breweries in the area. Our latest shipment includes local, domestic and imported brews with a number of variety packs for those looking to try something new.

This 12 pack of beers from Brewdog has 4 different kinds of 12 oz. cans including their popular Punk IPA, Hazy Jane and Elvis Juice, along with a new seasonal brew. A great opportunity to try out some classics from this brewery based out of Scotland.

There’s something for everybody to enjoy in Riverhorse’s new Hoppy Variety Packs!

Featuring their classics, River Horse IPA and Hippotizing, plus new additions Launch Pad and Starboard Coast - this variety pack showcases all hops can do.

The new Smuttynose variety pack gives you the opportunity to try all of the amazing brews offered by Smuttynose Brewing Company founded in 1994 in Portsmouth, New Hampshire. This pack includes Old Brown Dog Ale, a lighter American Brown with good balance, Finestkind IPA, Back Check IPA and Smuttynose Lager.

Cigar City Brewing is taking 4 of its favorite beers and combining them into one epic 12-pack. A little something for everyone, this box contains 3 each of the following beers: Jai Alai IPA, Florida Cracker Belgian-Style White Ale, Guayabera Citra Pale Ale, and Florida Man Double IPA.

BrewDog is on a mission to prove that alcohol-free does not equate to taste-free. And today they bring you two new alternatives to the mainstream. These two non-alcoholics bring all the attitudes of their flagship brews, along with all of the flavor – but none of the alcohol.

Brooklyn Special Effects IPA brings the bright hop aromas and crisp citrus flavors of our favorite IPAs to the non-alcoholic world, all with under 100 calories. We brewed it for drinkers everywhere who love all things hoppy and refreshing, but without the high ABV. Whenever and wherever the IPA mood strikes, Special Effects IPA is there to help you do more with your days and nights.

This full-bodied, hazy double IPA is Citra-hopped with a juicy combination of mango, orange, and pineapple flavors finishing with a grapefruit aroma and ferocious bite. This brew has a 7.8% ABV and 50 IBU’s which makes it a perfect selection for those looking for a fruity beer that still packs a punch.

Nelson Sauvin hops from New Zealand create this delightfully earthy, floral and crisp grapefruit flavored IPA with aromas of citrus and mandarine oranges. Try out this seasonal selection from Toppling Goliath based out of Decorah, Iowa before it runs out!

This Imperial Coffee Milk Stout is brewed with lactose and a careful blend of cacao nibs and aromatic coffee to emulate an iced mocha latte. This delicious beer asks you to slow down, pour a glass and enjoy the moment.

This is a super aromatic and intensely fruit forward brew, the latest entry into Three’s single-hop IPA lineup showcases galaxy hops. Big notes of pineapple, papaya, melon, and citrus shine brightly, without being held back by traces of pine or spice.

A bright IPA in the truest sense. Heavy additions of wheat and oats create a lush mouthfeel. Created with american hops (Amarillo, Mosaic and Simcoe) in the whirlpool and dry hopped. Notes of ripe orange peel, fresh picked tangerine and citrus. An all-day crusher that won’t tire the palate.

Mosaic, El Dorado and Chinook hops blend to create flavors of pineapple and candied strawberry with a touch of pine, over a soft malt body.

Inspired by the fruit drinks of our childhood, Juicy Jam is a kettle soured ale brewed with lactose and fermented with tangerines, sweet cherries, peaches and cranberries.

We now have a full lineup of Chimay beers in 750 mL bottles. Chimay Blue is copper-brown beer that has a light creamy head and a slightly bitter taste. Considered to be the "classic" Chimay ale, it exhibits a considerable depth of fruity, peppery character. Chimay Red is a dark brown colour dubbel and has a sweet, fruity aroma. Chimay White Label is a crisp beer that bears a light orange colour, and is the most hopped and driest of the four. Finally, Chimay Gold label is brewed from very similar ingredients as the Red, but more pale and spiced differently.

The tagline for this new year-round brew from Singlecut is “Subtle is Beautiful”. This pilsner is brewed with a unique combination of New Zealand, Czech and PNW hops and the absolute finest European malt. Finely detailed, refined, crisp, dry.

Yards Philadelphia Pale Ale
Dry-hopped with an abundance of distinctive Simcoe hops, this straw-colored pale ale is more drinkable than bitter, more aromatic than aggressive (and it comes in a 19oz can!)
Modist Double Dreamyard
Double Dreamyard is Modist’s award-winning exceptionally-rated juicy, hazy IPA that’s made entirely from oats and wheat and heavily hopped with Citra and Denali. They took Dreamyard and overloaded it with everything: extra oats, extra wheat, extra Citra, extra Denali, and pumped up the ABV to 8.5%.
Pipeworks Forest Fauna
Forest Fauna IPA with spruce tips, centennial and simcoe hops. This piney, citrusy IPA is treated with boughs of fresh, resinous spruce tips. It's like a wintery hike through a forest with your best unicorn friend.